The CES (Consumer Electronics Show) is a trade show featuring technology that may one day appear in consumer products. The show is held annually in Las Vegas, Nevada, in the United States, and this year there were more robots than ever before.
Website: www.ces.tech

Here are all the robots and robot-related technology that were on display.
Check the categories below for photos, videos and some notes.

The “KIBO and HUBO Show” was a live robotics demonstration at the Korea National Science Museum, running for a limited time from August to October. The museum is located next to Expo Park in Daedeok Science Town, Daejeon.
Website: www.science.go.kr/robot_world

The show featured two robots: there was KIBO v2.0 from KIST (Korea Institute of Science and Technology) and HUBO2 from the Humanoid Robot Research Center at KAIST. The robots performed scripted motions together with a live actor.

The graduate students and researchers at the HUBO Lab spent a lot of time preparing for the show. A custom version of HUBO2 was built, incorporating a Kinect depth sensor embedded into the chest enclosure (Fig. 2) so that the robot could interact with kids, and a red-colored LED dot matrix behind the face visor (Fig. 4) that can display words or facial expressions.

I don’t have a high-quality video of the entire show, however video 3 (below) shows four scripted behaviors: HUBO turning and walking towards the front of the stage, making a gesture, demonstrating active balance, and grasping an object.

The most impressive behavior is HUBO dancing to the song “Brand New Day”, by Julia Michaels (Video 4). The dancing motion was created using motion capture and Maya, and PhD candidate Inhyeok Kim developed a motion controller incorporating offline whole-body inverse kinematics and an online balance stabilizer. The video clip is from rehearsals and if you look in the background at 6 seconds in, you can see KIBO doing a “joint homing” sequence.

On this particular day KIBO was not functioning but here are two videos of the KIBO Show from a researcher who works at KIST. In Video 7, if you look to stage-left at 23 seconds in, you can see HUBO hanging from its stand. 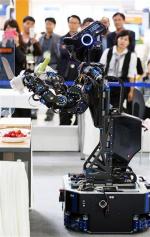 I spent a day looking around at the show. The exhibitors were a combination of companies advertising products, Government-based research labs and University labs. Unlike other robot shows, this one was not dominated by large international companies and so you could get a good idea of the true state-of-the-art of robotics research in Korea.

I’ve collated some photos, videos and notes into categories.
If you have any more information about these exhibits, please let me know.

I attended the ICRA conference that was held in St Paul, one of the “twin cities” of Minnesota.
My Professor Jun-ho Oh from KAIST delivered the plenary talk “Development Outline of the Humanoid Robot: HUBO II”, see Fig. 1 below.

You can view the slides here: (114 pages)
http://techtalks.tv/development-outline-of-the-humanoid-robot-hubo-ii/slideshow/

Or watch the full presentation:
http://techtalks.tv/development-outline-of-the-humanoid-robot-hubo-ii/
Update: Unfortunately it looks like videos on TechTalks.tv are broken.

You can see 3 video clips from the presentation below (Video 1 to 3), courtesy of Plastic Pals:
www.plasticpals.com/?p=32425

The ICRA 2012 Mobile Manipulation Challenge (AKA Sushi Boat Challenge or Yesterday’s Sushi Challenge) was held during the conference, for which teams had to program a PR2 robot to act like a restaurant waiter and make it perform tasks like setting or clearing a table. Video 4 below shows the PR2 robot “Jake” clearing a plate and bowl from the table. I forget which team this was but the robot was on loan from Willow Garage.

There were some other robots on display in the exhibit hall, including the new Robonaut 2 dual-arm robot developed by NASA’s Johnson Space Center and General Motors (Fig. 4).
Fig. 5 shows Robonaut’s hand, which is actuated by tendons (wire cables) that are fed through tubes to linear actuators. The actuating mechanism takes up more space than the fingers and is enclosed within the forearm.

I had the opportunity to visit the National Museum of Emerging Science and Innovation (“Miraikan”) in Tokyo, Japan.
Website: www.miraikan.jst.go.jp/en/
They have a permanent exhibition called “Robots In Your Life” where you can see and interact with various famous robots from Japan.

There’s a display showing the history of biped robots, including the WABOT-1 and WABOT-2 from Waseda University.

There’s a live demonstration of Honda’s ASIMO robot which includes walking forwards, walking sideways, balancing on one leg, dancing and kicking a soccer ball. Since I visited, I heard they have added running to the demo also.